Vathorst is the latest city-district of Amersfoort, It will be developed between 2002 and 2025. The area is situated in the north-east part of the city of Amersfoort, between motorways A1 and A28, in the centre of the Netherlands. The objective is to build some 10.000 houses with all the necessary amenities, including shopping, sporting and cultural facilities, public transport, healthcare centres, primary and secondary schools. These amenities are kept in step with the building process and as such offer inhabitants of Vathorst direct use of them. At long last some 33.000 people will be living here. The total size of Vathorst is 560 ha, of which 228 ha is specific designated for housing. The housing programme consists of some 10.000 houses of which 30% has to be affordable for low-income households. Offices (120.000 m2) and a business park (3 ha) are also part of the plan. The development itself stems directly from the Fourth Memorandum of Spatial Planning, a national housing programme dating back from 1993 (so-called VINEX).

Vathorst is realized by a Public-Private-Partnership. A partnership between two shareholders: 50 % Municipality of Amersfoort and 50 % for a Consortium of Private developers: Alliantie (Housing Corporation), AM, BPD, Dura Vermeer, Heijmans

Living in a diverse area

Anyone walking, cycling or driving through Vathorst will immediately notice the diversity in architecture and the variety in urban and rural landscape. This distinctive vision of individual living experience and lively architectural shapes has as inspirational quote: “A World of Difference”. The internationally famous urban planners Ashok Bhalotra (Kuiper Compagnons, Office for Urban Planning and Architectural Consultancy) and Adriaan Geuze (West 8, Urban Design and Landscape Architecture) made the general Masterplan. Research shows that the inhabitants of Vathorst identify with “their’’ area, their own place. They experience Vathorst as bustling and diverse. Vathorst has succeeded to connect modernity, quality and diversity. The Vathorst urban plan has been translated into four three different distinct plans: 1. De Laak, 2. De Velden, 3. De Bron and 4. the ring built around the village of Hooglanderveen. Each plan has a different character and appearance. 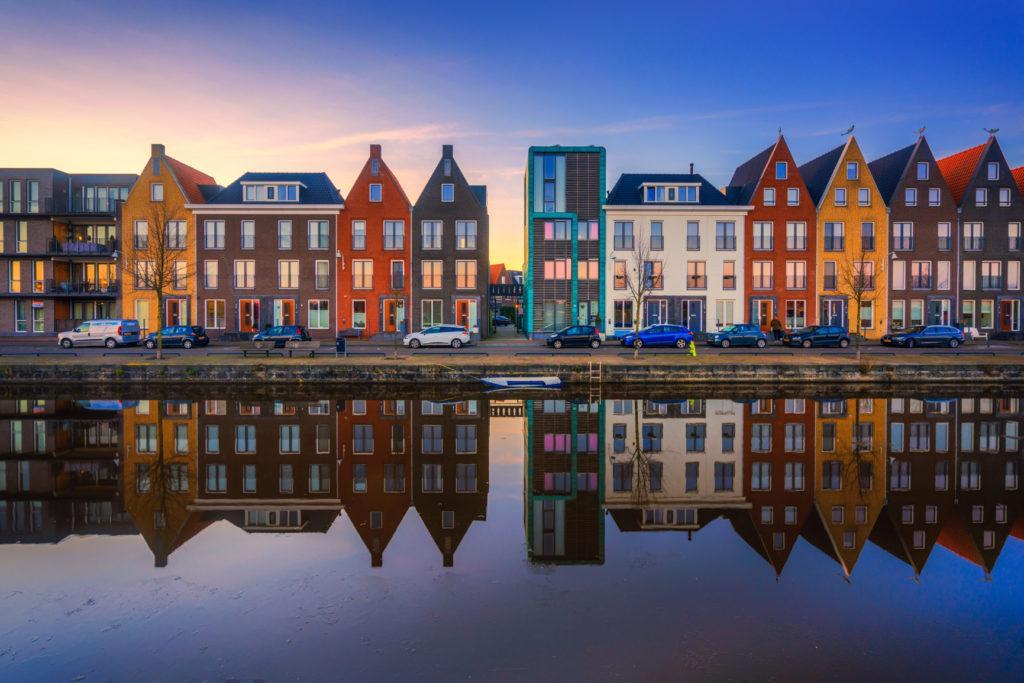 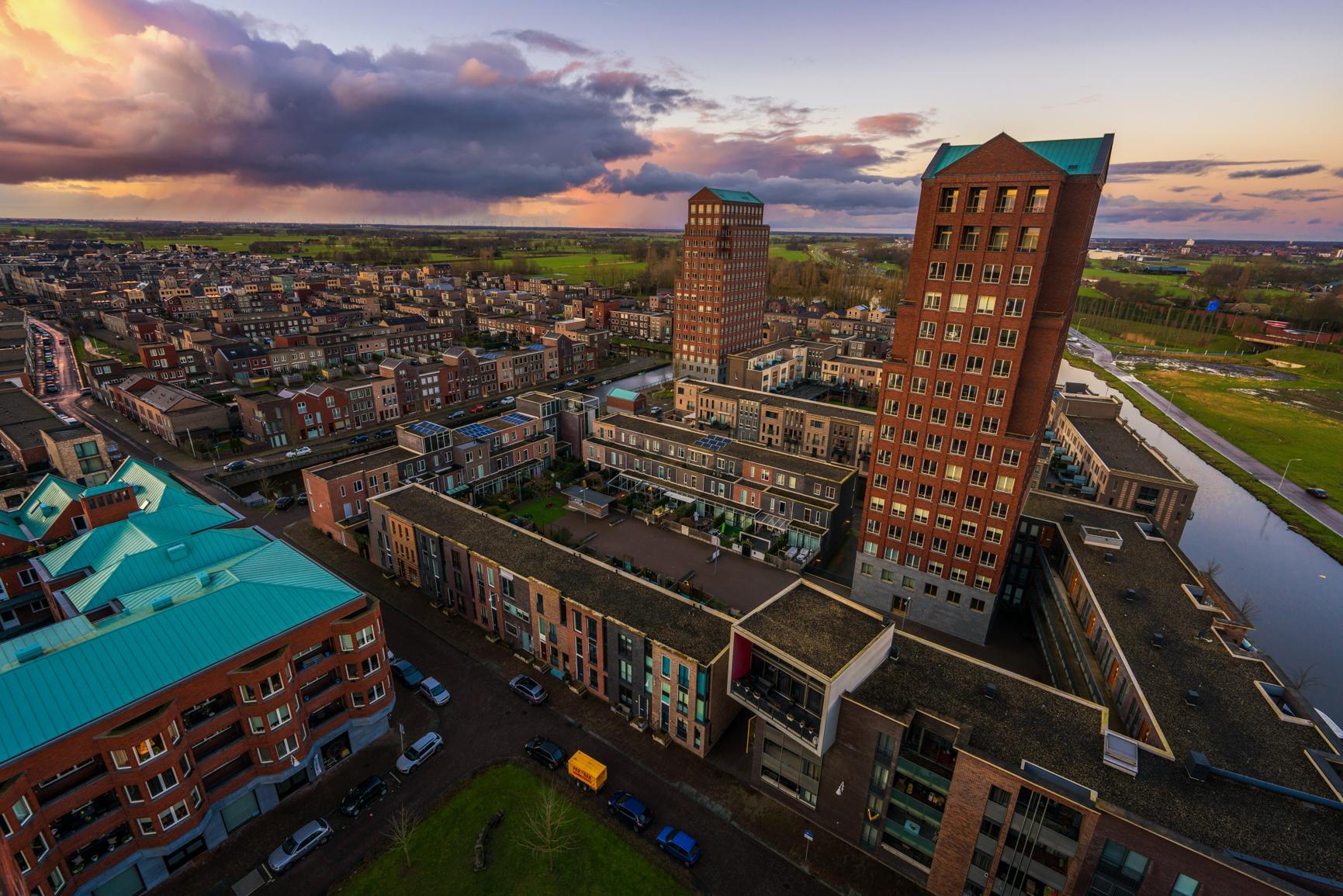 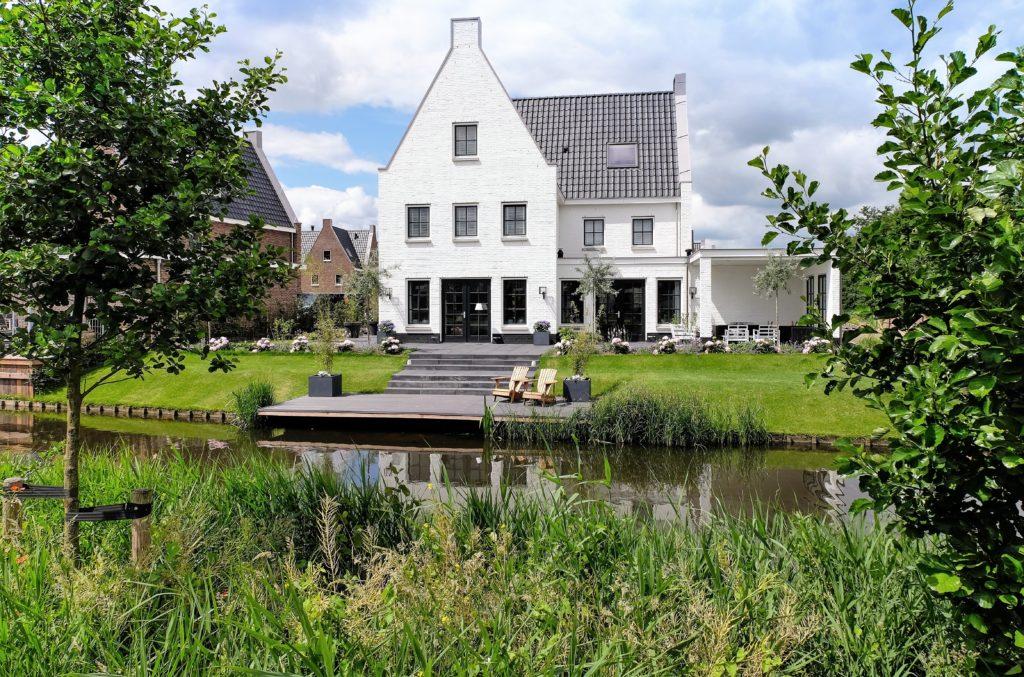 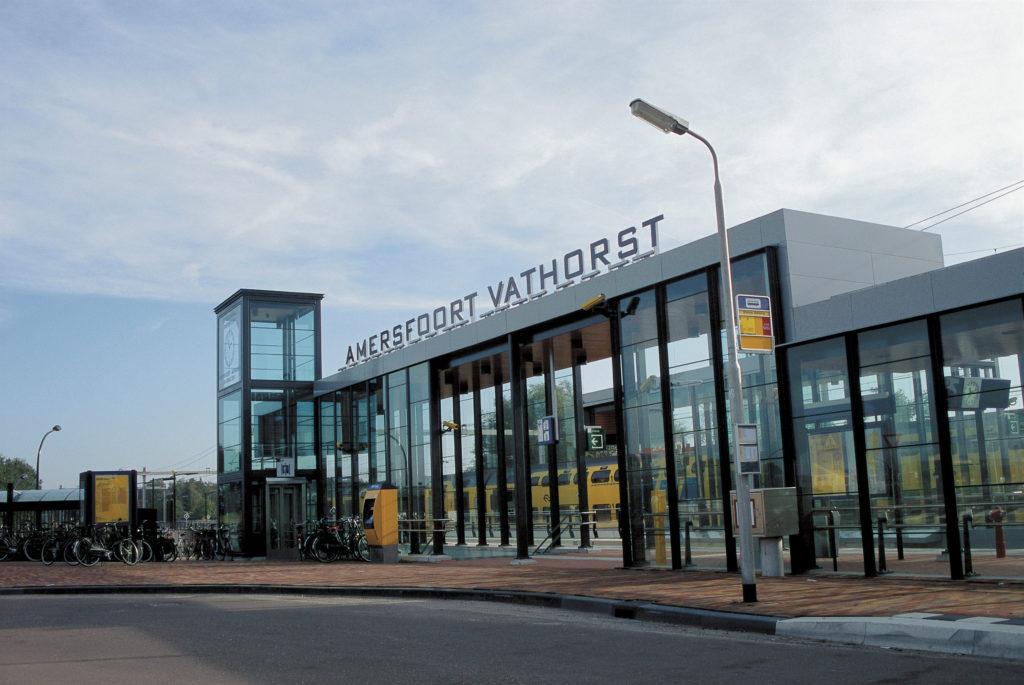 De Laak is a modern canal city, the north side skirting along the river Laak and the polder, the west side along the Laak boulevard. It is possible (in future) to sail from this area, via a sluice to Spakenburg and further on. This residential area is characterized by straight streets, detached canal houses, residential islands, concrete- and green quays and bridges. Eye-catchers are the beautiful canal-houses with raised entries, without front gardens, often directly situated on the waterfront. It is a contemporary area, where canals and residential space mingle and where children can play safely on broad pavements and in spacious courtyards. Throughout the neighbourhood leafy boulevards, waterways with green banks, trees and vistas to the polder landscape provide a spacious image. Existing farms and farmyards are carefully fit into this new residential area and often provide local facilities.

Situated in the heart of De Laak is the Kai-Park, with an abundance of places to play and bordered by a broad waterway. West-8 (Urban Design and Landscape Architecture) designed this park and was inspired by Japanese design styles. Its size is approx. 2 ha and it is surrounded by water on three sides. In the park are three characteristic red gates; works of art by the Czech artist Alexandra Kolácová. The work was inspired on a Japanese Torii Gate. In Japanese tradition these gates form the entrance to sacred places. Here, however, local residents meet and in summer often spontaneous picnics take place. Many residents have dinghies. Because of the widening of the Laak river, more possibilities exist for sailing and recreation; e.g. sailing from Vathorst to Bunschoten. In the north of Vathorst bicycle and equestrian paths, walkways and canoe jetties have been realized. Running in the polder is one of the favourite hobbies of many local residents.

De Velden, can be best characterized as village-like and green. De Velden has two different residential areas: one in which the original elongated plots of land can be recognized and another in which a mosaic of plots is recognizable. De Velden has more than 4.600 houses of various types: free plots, courtyards and terraced houses. The original landscape with its wooden banks and ditches has been fit in the plans as much as possible. The car-free ‘Lint’ meanders through the area and is often skirted by pollard willows. Nature farm “De Brinkhorst” , an old farm with meadows, orchards and barns, is also situated there.

Park van de Tijden (1.7 ha) was designed by Kuiper Compagnons, Office for Urban Planning and Architectural Consultancy. It is a linear green park bordered by park houses. The theme “tijden=times” is to be interpreted as a ritual of seasons, of past, present and future, of natural elements. The park was one of the first public meeting places of Vathorst, in particular for its residents. The music stage at the edge of the pond functions as a platform. The stage was designed by artist group “Conservatorium”. The park has been divided into different areas: the spring hill on the north-west side, the summer field with the winter pond, followed by the autumn forest. A work of art is situated right in front of this forest: Abdelkader Benali’s “Blinddruk van de Tijd” (2007). Birch trees surround the park like a pictureframe.

De Bron is also an area with its own identity. Characteristic are the wooden banks and lake in the middle of the area. At the edge of this lake (and partly within) the ABC school building is situated with two schools and several facilities. ( Architectenbureau Herman Herzberger, AHH). The original wooden banks and trees have been conserved. The stately avenues and intimate courtyards give this area a strikingly green appearance. The BRONpark was opened in 2013 and is situated in the heart of De Bron at the central lake. The park (0,7 ha) consists of three parts that merge into each other. A restaurant in a greenhouse, called “Daphne in de Kas (bydaphne.nl)” is situated at the border of the pond. Its terrace has a beautiful view of the lake. There are sports and games facilities, a kitchen garden, a boulevard with a wooden watchtower. The middle of the park is suitable for playing with sand and water, there are stepping stones, a draw ferry and a playing table in the water. This part of the park continues into the less accessible part, where nature dominates.

The village of Hooglanderveen became part of Vathorst. Since the development of the residential area of Vathorst (2005) the amount of inhabitants in Hooglanderveen has doubled; the extension of the area has resulted in a modernized infra-structure, a larger range of shops, a new community centre and new accommodation for its soccer and tennis clubs. The railway station “station Amersfoort Vathorst” is situated near the centre.

The barn swallow has been the logo of Vathorst for years. Each year this bird returns to its familiar environment to build a nest and mate. It uses different materials, found in its direct surroundings. The barn swallow therefore symbolizes Vathorst: a district that regards nature important and has developed into a diverse and warm “nest” for its inhabitants.

Until the end of the nineteenth century Hooglanderveen consisted of scattered, often small farms and some labourer dwellings. In 1863 the railway Amersfoort- Zwolle was built, with a stop and railway house added to Hooglanderveen in 1898. From that time on, //ook veel in de 50’s// a residential core with facilities, shops and trading companies originated. January 1st, 1974, Hooglanderveen, already part of Hoogland, was annexed by Amersfoort. The extension of the city with the new neighbourhoods Zielhorst, Kattenbroek, Nieuwland and most recently Vathorst has caught up with the village. The interest group Hooglanderveen has therefore advocated for protection of the identity of the village at the municipality and Development Company Vathorst. It was rewarded with an area of greenery alongside the village.

Vathorst is conveniently located. Vathorst Company Estate (30 ha ) lies alongside the A1 motorway. The Podium office park with 120 m2 of office space alongside the A28 motorway, is being redeveloped into an area with two already existing offices and new housing projects. In the near future The Collection Centre Netherlands (approx. 3 ha?? 30.000m2) under supervision of The Rijksmuseum, will be built here. This super depot was designed by Cepezed Architects.